Kino and the King

No wonder the landscape looked completely different. The room started to spin. Glancing at the girl and boy again, Kino Kahele understood. She was in the company of young Kauikeaouli, the actual Kamehameha III, and his royal sister, Nahienaena.
“I don’t belong here,” Kino shifted her gaze from one sibling to the other. “I’m from a different time.”
“What time? Night time?” Princess Nahienaena asked.
“No,” Kino shook her head.  “I mean from the year 2016.”
The pair stared at her with blank expressions.
“I’m not crazy,” Kino gripped the cushion she sat on. “I don’t know how it happened, but somehow I ended up here in 1825, and now I need to get back home – to the future.” 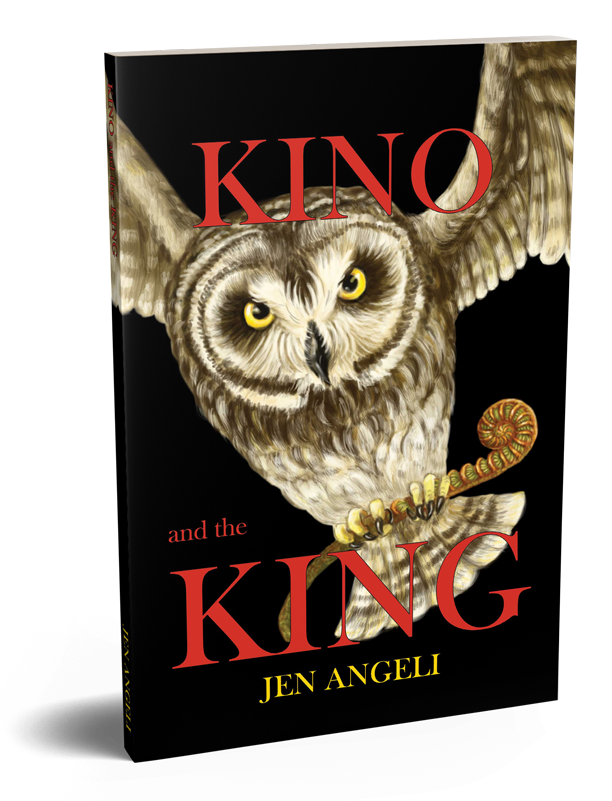 Kino and the King by Jen Angeli is a middle grade adventure quest set in Hawaii. Cutting to the chase, we need more stories like this one where island kids see themselves as the heroes and Hawaiian culture as something both amazing and ordinary, rather than sensationally exotic.

In the story, 12 year old Kino and her mother move to Hawaii to live with her maternal grandparents in Kalihi, Oahu. With her grandfather ill and her family facing eviction from their home, Kino discovers that she has an ancient destiny to save both Hawaii and her grandfather by going back in time to 1825. There she meets the young Kamehameha III just prior to his ascension to the throne. After meeting with a kahuna at a heiau, it becomes clear that in order to return to her own time,  Kino must go on a quest for four objects gathered from various parts of Oahu—and of course the young prince is going to come along.

1825 is a significant time in Hawaiian history, after the fall of the kapu system and during the first years of the Protestant missionaries’ influence. Hawaii is experiencing the growing pangs of contact with the wider world. In the story there’s a glimpse of the monumental civic and cultural challenges, but Jen is always conscious of her 4th – 8th grade audience and keeps the action moving. Topics are lightly touched upon in a way that can start discussions about these important topics. Kino and the King is respectful of Hawaiian history and culture. Teachers, parents, and librarians will find it provides a springboard for further reflection, study, and inquiry.

But as good as 1825 was, I gotta say I liked the modern conflicts best. Mean girls, romantic interests, class wars, private school snobbery, leasehold vs. fee simple landownership, high cost of living in paradise, afterschool enrichment classes in Hawaiian—it’s all here. Anyone growing up in Hawaii will instantly relate to Kino’s modern world—and those far from home will probably crave spam musubi reading about it.

Readers of The Niuhi Shark Saga books are certain to enjoy Kino and the King. Can’t wait for Jen Angeli’s next adventure.

Author of The Niuhi Shark Saga

By joining, members will get latest news, special pricing announcements, and appearance notices.

To confirm your subscription, check your email and click the confirmation link.