Growing up as Jen Angeli

Jen Angeli grew up on the island of Oahu, first in Kalihi until age four, then Pearl City until age eighteen. A graduate of Honoluluʻs St. Francis High School in the mid ‘80’s, Jen pursued different writing courses in college and earned a certificate in Screenwriting from Cal State Fullerton. This is her first fictional novel.

Like the main character of her book, the author was raised with a strong sense and appreciation for the Hawaiian culture and the diversity of the islands. Her Hawaiian/Portuguese grandmother taught her how to catch, prepare, and eat food from the ocean. To pass the time awaiting crabs to fill their nets, she’d tell Jen stories of a simpler time in the islands and what it was like growing up on a ranch in Molokai.

In high school, Jen picked up a copy of James Michener’s HAWAII, which brought the past alive in her imagination and planted the novel writing seed. Trips to Bishop Museum in Honolulu, once when she was nine-years-old and later in her twenties, sparked the idea of traveling back in time through the grass hut on exhibit, although it was decades later before an actual story came to mind.

Jen has five children and four grandchildren on the “mainland.” After years of living in California and Florida, and traveling throughout Europe and the Caribbean, she now resides in Pearl City, with her dogs Bella and Chloe. Her time is spent teaching mindful yoga in Honolulu, helping people heal their energy, and fostering dogs for the Hawaiian Humane Society. In addition to writing, Jen enjoys acrylic painting and playing Scrabble. 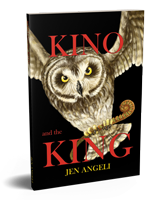 Join our mailing list to get a FREE Chapter from Kino and the King. Plus receive the latest news and updates from our team.

You have Successfully Subscribed!